skip to main | skip to sidebar

There was no doubt in my mind that the elevation was affecting my sleep. On top of usual race day jitters from running the upcoming day through my head, the thin air was causing me to be much more fitful and feeling like I was only dozing and never really sleeping. Day 2 cracked bright and early once again, but at least the course today was promising better flow and more fun. I'd ridden a good chunk of the course several times on various trips and was looking forward to the massive descent from the West Ridge of Colorado trail.

I got up and tried to focus on getting some food shoved down my throat. Given yesterday's ass kicking and the poor night's sleep though, my body rebelled at the very idea. My usual greek yogurt topped with granola sat there staring back at me until I gave up trying to eat it. I turned instead to a piece of toast and some coffee as the only things I could muster the energy to eat. I was pretty sure this didn't bode well considering the 40+ miles and near 6,000' of climb on tap for the day. 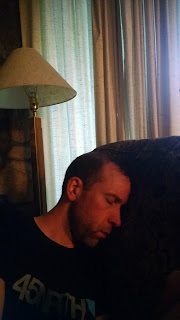 I ended up sitting in a chair trying to get a bit more rest in lieu of forcing anything more on my rebelling stomach. I guessed that I'd just have to try eating from the gun during the race and hope I could keep up with enough calories to push through the day without bonking again.

Our start today would be staggered with two groups heading out 20 minutes apart. The "fast" guys and gals from the 6 day race would all be stacked up front and then the balance of the 3 day racers and cat 2-3 racers would be starting 20 minutes after us in an attempt to keep the singletrack bottlenecks from being too bad at the start of the race. We lined up for our neutral rollout and I hopped in with the rest of the singlespeeders who were placed near the front of the gates in some type of cosmic inside joke given the neutral rollout speeds that would see most of us flailing along valiantly as the majority of the geared back would roar past us. I made some idle chitchat with a few of the other guys standing around, but mostly sat in silence hoping the day would end better than it was starting.

Soon enough we were rolling along in a big pack until the first flatish/downhill where the aforementioned separation occurred between the haves and have nots regarding shifting. We'd use this rollout a few more times through the week so it became a bit of a challenge in seeing where I could gain speed or time. Typically we'd roll up Wellington on a shallow grade and I'd reattach myself to the pack and start passing people again that I'd rather be in front of when the heavy climbing started. My legs slowly warmed as we jumped straight into climbing up Gold Run Gulch Rd twisting and winding up the steep but rideable grade.

I ground my way past Dicky at one point making a joke about hiking so early, but soon enough I'd be back off my bike for another day of walking and riding. I started questioning whether or not that 32x20 was such a great gear selection at this point. Over the top though, things got moving again and I soon found myself in a string of riders with one guy in front of me. As things pitched downhill it became pretty obvious he wasn't feeling the gravity love. We called for a pass and I turned on the gas creating a gap with a few others including Dicky following my lead. We found a few others riding a similar pace and held a nice line with some witty banter and even joking about Dicky taking an apparent header off a bridge on Day 1.

As we hit Galena ditch which is a long flat section of relatively fun and mostly non-technical singletrack, the geared boys and those with legs feeling spinnier than mine, took off again and left me to my own devices. Given my feelings from that morning, I had made my peace with riding whatever pace felt sustainable for the day. Keeping my focus on goal #1 of finishing all 6 days was foremost in my head. We wound our way out to aid station #1 which would be shared a few times from different directions throughout the week and I kept right on rolling knowing that the climb to the top of West Ridge was going to be a grinder, but waiting on the far side was one of my favorite descents anywhere. The feeling of flying back down from the top of the Colorado Trail is one of the most gratifying experiences you can have on a bike down there. The trail is almost perfectly pitched to encourage blinding speed and the trail hazards are relatively minimal with the exception of some quick approaching switchbacks and occasional downhill rock gardens.

Once we were down the trail, we switched back towards Keystone Ranch and trails I hadn't been on previously before we wound back around to aid #2 at Dredge Boat. While my stomach hadn't been really bothering me to this point, it was begrudgingly accepting whatever I threw at it whether it be my Kate's Stash Bites or the CarboRocket 333 Half Evil I was chugging along with some plain water. With 12ish miles to go, I still felt ok especially considering the semi-onerous start to my morning. I kept my stop quick grabbing a reload on some fuel from my drop bag and then beginning the next churn up the jeep road leading out of the aid station. Grinding my way up, I found it mostly rideable with very limited need for walking. I was beginning to really question my gearing choice though given the extended amounts of time I found myself with a cadence in the 40's and 50's.

Somewhere in here, my stomach started feeling a bit sour once more. In hopes to head it off at the path, I stopped and tried downing a few of my ginger/peppermint capsules that I've used before to successfully settle my stomach. I nearly chucked them back up though as swallowing them didn't go quite to plan and I had to gulp them down to dislodge them from the back of my throat. Feeling a bit queasy now, I enjoyed the last downhill stretches of ZL trail before we began the last road climb of the day. A few riders had passed while I was stopped, but for the most part I was on my own again. The lower pitches were rideable, but as I neared the meat of the climb, I was off and trudging again. 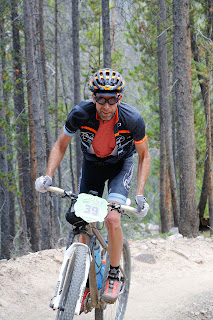 Once at the top, it was rolling track that inched us ever closer to that last rush of speed that would carry us to the finish line. Looking back, I'm beginning to think they purposely chose the downhill finishes on the first couple of stages to etch those memories in our heads over the punishments we'd faced earlier each day. As it were, I hauled ass down the last bits of singeltrack to a welcome finish and surviving another day. My teammate Andy who was racing the 3 day and had made up the 20  minute stagger and passed my on the Colorado Trail portion was still there and we chatted for a few minutes about how at least I didn't feel as terrible as yesterday. I survivded the day once again in 11th and holding onto the not last place singlespeed goal. 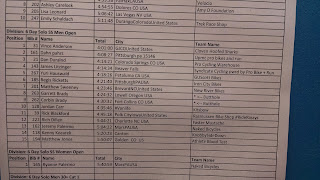 A peculiar feeling crept into my head though that I better exit stage left quickly and head towards the condo as a rumbling in my gut began to recur. I bid Andy a hasty adieu and jumped on my bike coasting down into town. Just as I rolled into the edge of town proper, all the liquid I'd been taking in the last few hours decided it needed out in the most urgent and direct route possible. Before now, I wouldn't have guessed that I could vomit while still riding my bike, but not only did I manage once, but ultimately 3 times as gravity swept me back into town. I sincerely hoped the few droplets of rain were going to gather and wash away the mess I'd left on the road, but whatever the case, I needed to hit the condo and hit it now.

Getting back to the condo, I headed straight to my room to lay down and hopefully keep any further episodes from happening. Once I later emerged and explained my situation to my condo mate, we began to piece together that my heavy on the protein diet, a touch of altitude sickness, poor sleep, and racing hard were all coming together to kick my ass. I pretty much decided to scrap my recovery food plan at that point and follow along with whatever he was eating since my diet was killing me at this point.

We ended up at Luigi's pizza down on the main drag and aptly enough, ordered the Hangover as one of our pizzas. 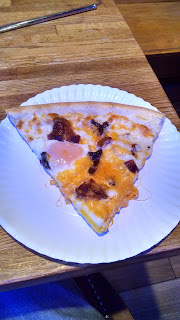 Given my day, it actually hit the spot rather well as we watched a deluge of rain pour down on unsuspecting passersby. It appeared my wish of having my stomach contents recycled sports drink that I left upon the streets of Breckenridge washed away were coming true. Maybe this would be a good omen for the days to come.
Posted by Buckshot77 at 4:41 PM